Buttons are back! Or how I added buttons to my Thinkpad Yoga S1

I've been rocking a Lenovo Thinkpad Yoga S1 for a while now and generally love it.  One thing that has always bothered me was the trackpad.  It was large and smooth, but it lacked dedicated buttons, and was very clunky when pressed.  Lenovo got beat up in reviews pretty bad for their choice to remove the trackpad buttons from the Thinkpad line and in later models decided to bring them back.  On the Yoga they came back on the Thinkpad Yoga 12 in late 2014ish.  A user on the Lenovo forum noticed that they looked about the same size and ended up gambling and ordering the part from Lenovo.

To break it down you just need Lenovo PN: 00HN577, a screwdriver, and the drivers from Synaptics.  I bought mine on e-bay for about 50 bucks and the install couldn't be simpler.

I think the upgrade is well worth the time and money.  Having the buttons back makes a huge difference.  I like the feel of the new pad more than the old one, and clicking the pad is much improved. 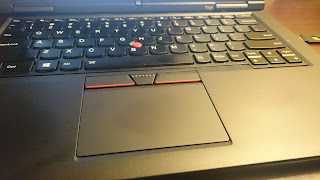